Environmental problems cause different debates, discussions, awareness campaigns and public outrage all over the world. In recent years, advanced technologies such as AI, cloud systems have become very popular and have gained importance.

The demand for Artificial Intelligence in various aspects of life is increasing day by day. In fact, there are tons of AI applications that can be seen in the environment these days.

The public and government agencies could use technology to solve problems such as waste disposal, planting fields, building roads, controlling pollution, and more. But fortunately, there are only a few developed countries that have used AI technology in such areas; others just rely on old, traditional methods.

With the significant investment in Artificial Intelligence (AI), large companies can use AI to make their operations more environmentally responsible.

The future will be a historic moment in the field of AI.

All major AI fields are interconnected, such as Big Data, advanced hardware, emerging amazing and powerful AI algorithms. Moreover, tons of open source community tools and startup ideas will lower the entry barriers in every industry with the help of AI technology.

This is how AI is leaving the research labs and entering everyday life, from navigating cities and carpooling to powering our energy grids and surfing the web.

In our article, we discuss several areas where AI can be helpful in achieving these goals, as well as how upcoming AI-based technologies could be the best way to solve environmental problems.

But first, let’s discuss the definition of AI (Artificial Intelligence).

What is Artificial Intelligence?

AI, or Artificial Intelligence, refers to any machine or computer system that may simulate human behaviours and have abilities to work like a human does. For example, understanding and responding to language, recognizing objects, responding to the voice, collection of data, making decisions, and solving problems. Through the integration of these capabilities, it may be able to handle complex tasks, such as driving a car, autopilot, waste management, fitness, smart systems, location tracking and a lot more.

According to Semrush AI research Stats, AI will dominate the world in the near future as it is expected to be the biggest game changer of the future. AI is expected to contribute as much as $ 15.3 trillion to the global economy by 2030, a figure that exceeds the current GDP of China. AI has evolved so much that it can now employs an unemployed engineer in industrial fields or any other business if he has taken a course in artificial intelligence.

In addition, they have suggested a refocus on the use of this technology, which is responsible for self-driving cars and voice/face recognition in smartphones. By assisting global efforts to eradicate poverty, hunger, and protect the environment and conserve natural resources, AI sustainable development is made possible.

Many big names like Microsoft, Google and Tesla have pushed the boundaries for human progress, they have made significant strides in the development of ‘Earth Friendly’ artificial intelligence systems. A DeepMind AI application from Google has helped the company reduce data centre energy consumption by 40%, making their facilities more energy efficient and reducing global warming. As a result, their data centres consume 3% of the world’s energy each year.

Artificial intelligence techniques can be used in the installation of smart grids in cities. In smart grid systems, artificial intelligence is involved in controlling and regulating components of the neighbourhood power grid so that it can deliver the exact amount of power needed or requested by dependents. In contrast, conventional power grids are against it due to unscheduled power distribution which can be wasteful.

In the upcoming age of AI-driven autonomous vehicles, technologies such as route optimization, eco-driving algorithms, and ride-sharing services will assist in reducing carbon emissions and limit the number of vehicles on the road.

Use of AI in Climate Change

The use of machine learning technologies to optimize energy generation and demand in real time, planning and building better grids with increasing predictability and efficiency, and integrating renewable energy into the power grid.

Smart sensors and meters are expected to be deployed within buildings to collect and analyze data and optimize energy consumption within these buildings. As machine learning algorithms are already being used in smart transportation, such as in Google Maps and Waze, to optimize navigation; improve safety; and provide information about traffic flows, rest areas, parking, gas stations, and more.

The implementation of technology, such as the Internet of Things (IoT), would simplify the process of waste separation and collection. Waste management company Nordsense ( San Francisco ) has developed an automated system that uses smart sensors and cameras on trash cans. Once the garbage is full, these smart sensors notify the company so that it can be emptied in time.

Moreover, the high-resolution image of the garbage can be viewed at any time by the person in charge via a mobile device. In addition to GPS, these smart dumpsters are also equipped with cameras. This means that their location and movement can also be tracked.

The IoT cloud platform then analyses this data. The dumpsters can be seen in different areas, and the garbage collectors only pick up the ones that are full. So by using all these AI technologies, their time is saved and they don’t have to make a

An artificial intelligence-based approach can enhance the predictability of renewable energy demand. It can also increase energy storage, efficiency, and load management. Integrating renewables and maintaining efficiency is possible, as well as enabling dynamic pricing and trading, creating market incentives.

Through the use of artificial intelligence, realistic simulations and real-time data (including social media data) of weather events and disasters in a region can be analyzed to identify potential vulnerabilities and improve disaster preparedness.

The technology can also provide early warnings and prioritize responses to emergencies using coordinated emergency information resources. In the future, Deep Reinforcement Learning could also be used in disaster simulations to determine optimal response strategies, similar to how artificial intelligence is now used in games like AlphaGo to determine the right move.

Artificial intelligence can use satellite imagery to detect changes in land use, vegetation, forest cover, and the effects of natural disasters. Monitoring, identification, and tracking of invasive species can be achieved with the technology described above. Identification of invasive species and tracking their presence and removal can be done using computer vision and machine learning.

AI is used by Blue River Technology to detect the presence of invasive species and other changes in biodiversity. In addition, anti-poaching units now use predictive software to plan their patrol routes

Food is wasted in Germany every year before it leaves the production process. REIF partners explain that there are strict safety requirements and low levels of predictability in agriculture.

As well as the numerous product-specific boundary conditions in food processing, strong fluctuations in demand, and the trend toward individualized foods in the food industry. Since the onset of this ecological and economic crisis, both sides have been effectively cooperating to prevent its reduction.

The future of artificial intelligence in space:

Several new satellites are being built, including MethaneSAT, which will launch into space soon. The purpose of this satellite is probably evident if you are familiar with the effects of methane.

If not, we are here to tell you. The methane sensor will be sent into space to map and measure it with unparalleled precision almost everywhere on the planet. Methane will be visible in places where it is hard to track.

iNaturalist and ebird are AI-driven platforms. Many sources provide them with information about the birds they encounter. Monitoring their migration pattern and tracking their population will be made possible. These artificial intelligence-based technologies have assisted with the identification and protection of freshwater and marine ecosystems.

Combining artificial intelligence and augmented and virtual reality (AR and VR) could be used to simulate and automate the generation of zoning laws, building ordinances, and floodplains. A city-wide dashboard of energy, water consumption, traffic patterns, and the weather could optimize urban sustainability through real-time data.

By 2050, the human race will require about 70% more food than it currently produces. Farmers could grow food more efficiently, and at the same time in an environment friendly way, with better and more accurate data.

In Microsoft’s FarmBeats project, sensors, drones, satellites, and tractors supply data for artificial intelligence models on the cloud to provide detailed information on soil quality and humidity levels in fields. Usually, farms lack fast Internet, so data is sent to the Cloud through unused airwaves between TV channels.

Final Verdict: AI Technologies will change the World By 2030

When using artificial intelligence systems, scientists and researchers must ensure that the data is trustworthy, transparent, and fair.

As there is an increased need for automation solutions and more accurate data analysis for environmental problems and challenges, businesses, educational institutions, and government sectors must invest more in the research and development of such technologies and provide proper standardization for their development and application.

This technology also requires a greater number of technologists and developers. In the last decade, artificial intelligence has made significant progress in the field of environmental science and management, which can be indirectly linked to its impact on our daily lives. 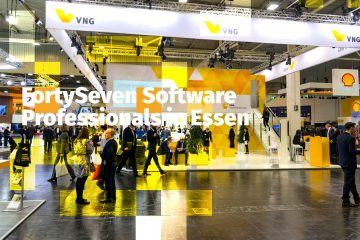 February 10, 2019 E-world Energy and Water 2019: FortySeven Software Professionals Read More
We use cookies to ensure that we give you the best experience on our website. If you continue to use this site we will assume that you are happy with it.OKPrivacy policy